The four of us took the Corinth, Cave of the Lakes, and Railway tour with Nicos. Two-part review.

1. The tour company. They are beyond excellent. Our guide, Nicos (sp?), was polite, knowledgeable, funny, accomodating. Everything you want in a guy you’re going to spend an entire day with. The whole day will be about your party. The food and drink will be ordered to meet your interests as will the tour itself. The van we took was comfortable, safe, and Nicos is basically Mario Andretti in a tour van. Really really good. If you’re thinking of going outside Athens to visit Meteora, Delphi, Olympus, etc. you should literally book every single tour with these guys. We did Meteora by train, it was great, would’ve been better with these guys. Literally, the best tour experience we’ve ever had. 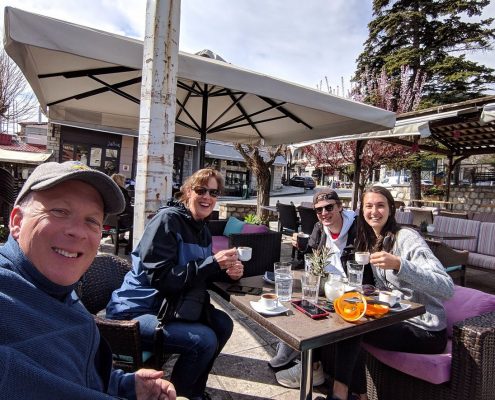 2. The tour. We visited Corinth, Cave of the Lakes, and did the Railway tour. Here’s what I think. Corinth is amazing. Go there, walk amongst the ruins. Mind-blowing. The Cave of the Lakes is cool, but it’s a cave….it’s not an especially Greek cave or something that needs to be done whilst on a vacation around the world. We’ve visited the Howe Caverns in NY and the Ailwee caves in Ireland…they’re all the same. So I guess if you’ve never been in a cave, this could be cool. We should’ve known better. We shouldn’t have spent our time at this attraction. The railway was also not the right choice for us. The views, while good, paled after Meteora and again, the train wasn’t anything special to a visit to Greece. You won’t see any ruins or anything especially memorable, and the train ride is not guided in any way. I would’ve rather been in the van with Nicos.

Since you can create what you want, here’s what you should do. Use these guys to see Meteora (it will leave you agape). Visit Corinth. Our kids visited Napflio and Delphi and said it was awesome….go there.

In summary….fantastic tour service. Maybe the best ever.

Review for: Aegina Island & Temple of Athina Aphaia: A Unique Getaway to Sapphire Water Our family had an absolutely amazing time touring with Nikos/Eudaimonia. If you want to truly experience Greece, its culture, history, and food, in a “non-touristy” way, Nikos is the one to do it with! We started with a trip to the island of Aegina, not too far off the coast of Athens. Nikos picked us up at our hotel, drove us to the port of Piraeus, and brought his car onto the ferry so that we could tour around the island on our own. We visited... END_OF_DOCUMENT_TOKEN_TO_BE_REPLACED
A special custom tour with charming guide

Best Lemon Cake I have ever had!!!!