Memories made to last a lifetime!

We went out on this private tour as a group of 6 (three couples). Nikos picked us up promptly at the scheduled time, directly from our hotel. The van was a new model, like Mercedes, that seated 8. Comfortable and clean.
Nikos took us throughout the countryside, stopped in a little town to have a traditional Greek coffee at a small cafe. He did all of the talking for us, thank goodness because we don’t speak Greek! We were greeted at the table by the “welcoming committee,” also known as two local neighborhood dogs. They were adorable.
We moved on to drive further into the countryside, where Nikos took us to a seaside location for lunch. It felt like we were on our own private dining experience because we were the only ones eating and the only people as far as the eye could see (aside from the restaurant staff, of course). The ocean was stunning, the FOOD WAS AMAZING. And there was so much of it. I feel like we tried ALL of the traditional yummy food during this tour. Crazy that all this food was included in our tour price! 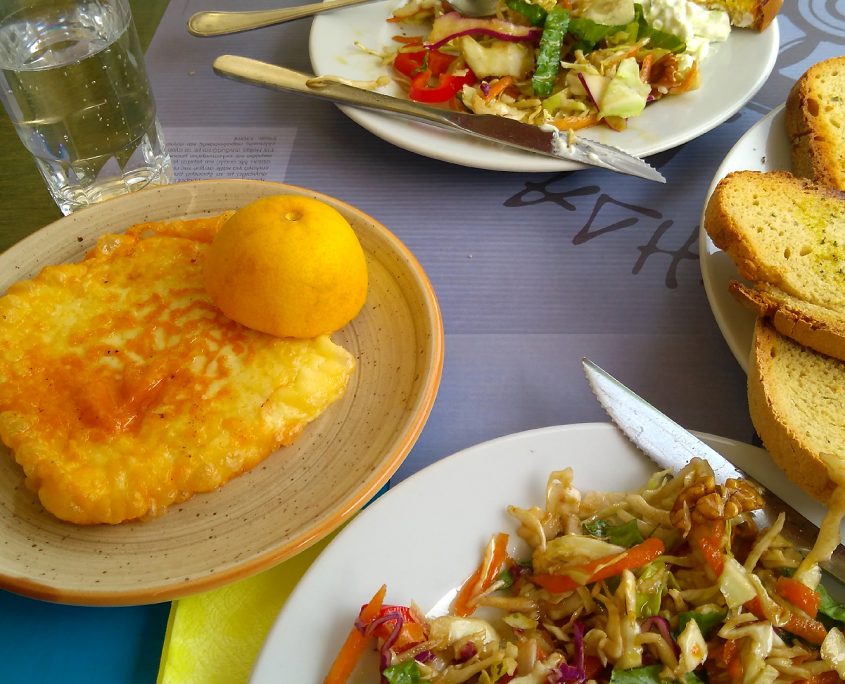 Nikos taught us how to eat the foods and the proper way to drink ouzo. And we drank a lot of ouzo. Haha!
We then went to Ancient Olympia, where Nikos dropped us off and let us explore the ruins. Because of the time of the year, we were nearly the only tourists at the sight. (Honestly, I think offseason is where it’s at folks!) We then spent a few hours taking pictures, running on the track where the ancient Olympians ran and making good memories. To signal that we were done touring the sight, we simply dialed Nikos’s number and let it ring a few times, didn’t have to complete the call so as not to charge for an international call. Genius!

Nikos then took us up through the mountainside (tons of switchbacks, bring your dramamine!) and told us the history of the old mountain towns. They were just stunning! Something out of the movies, or a storybook. We stayed in a town called Dimitsana, in this beautiful high-class hotel that sat right on the mountainside. Breathtaking view!

Nikos left us to explore the little town for the night and enjoy ourselves. We had dinner at a restaurant that was so nice and authentic. I’m pretty sure the person who took our order also made our food. We drank local rose wine and enjoyed ourselves, explored the town a bit, though it was cold, and then went back to our hotel (which felt like a private hotel) and drank the night away. It was fun.
Okay, so that was just the first day guys!

The second day, we woke up to breakfast in the hotel, where they made us food to order on top of the continental breakfast! We all headed out after this for the day to check out two monasteries. Both beautiful, but what really made it special is Prodromos, the second monastery. See, the day before, my man asked Nikos where he could propose to me (I had no idea, you know, until after, of course). He wanted to do it somewhere beautiful and special. Nikos took the time to think about it and helped my guy coordinate a perfect spot. And it was perfect, you guys. Pulled off the surprise flawlessly. The view from the balcony at the Prodromos monastery is so beautiful. (sigh) Thank you, Nikos, for helping my man create the best proposal ever! 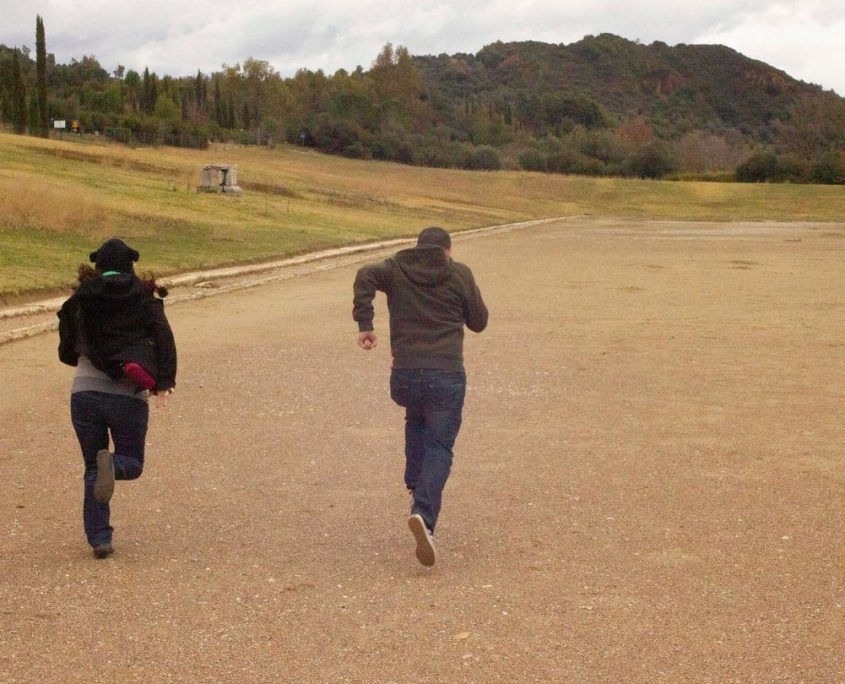 After we toured the mountains and the two beautiful monasteries, Nikos took us to yet another small town where we ate a huge meal, and the food was amazing, again! This time, the restaurant owner gave us a dessert (Baklava) that was made by his very own mother. It was rich and flaky and such big portions that none of us could finish it! So sweet, what a memory.

After lunch, we had a drive back to our hotel, where Nikos stopped to let us take pictures at certain locations if we wanted. The entire thing was great, and to top it off, because a couple member of our group was looking for a specific candy that we just could not find in Athens, Nikos went out of his way to drop off a couple of bags of it at the hotel front desk that very same night we returned. It was such a kind gesture, he didn’t have to do that. 🙂

This tour was worth every single dollar spent. Would do it again in a heartbeat.

☼☼☼ Cliff-hanging Monasteries, Mountain Villages of Peloponnese, Lousios Gorge & River ☼☼☼ WOW, what can one say about this tour? It was excellent! Our guide, Nikos, seemed more like a long-lasting friend than a tour guide. He tailored the tour to suit us, our fitness levels, food options, and interests. We motored through the extremely winding roads of the Peloponnese mountains, stopping to explore and enjoy the mountain villages. We journeyed through the stunning forests of pine and autumn trees, which were changing to brilliant colors. We visited the villages of Dimitsana and Stemnitsa, very stunning villages with narrow streets lined... END_OF_DOCUMENT_TOKEN_TO_BE_REPLACED
Great day trip to Corinth